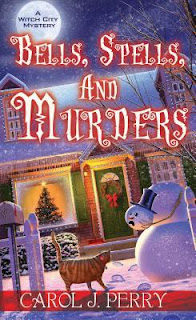 Fresh from her stint as TV psychic, Lee Barrett finds herself as a field reporter for her hometown television station WICH-TV in Salem, Massachusetts. In Bells, Spells and Murders by Carol J. Perry, Lee is set to interview Albert Eldridge, the popular chairman of the Historical Charities of Salem.

When Lee and her camerawoman arrive for their appointment, they find Mr. Eldridge slumped over his desk. As Lee taps him, he sinks to the floor. She knows he is either unconscious or dead and immediately calls 911. Two police officers quickly arrive on the scene and determine Mr. Eldridge is dead, but refuse to say if he was murdered.

With some many holiday events being planned by the Historical Society, it's a difficult time to be leaderless. Nevertheless the efficient Ms. Jeffry leaps into action (think Miss Lemon from Poirot mysteries) and second in command Conrad Gillette steps in quickly.

Lee's boyfriend is Detective Pete Mondello and as he is charge of the investigation, she hopes to get

some information she can use on her live report for TV. Pete is tightlipped and refers her to the press conference being held by the Chief. Although the Chief declares it murder, he refuses to say more.

This sends Lee into reporter overdrive as she tries to uncover information about Mr. Eldridge and the various charities the organization benefits. With disturbing psychic visions interrupting her day and night, Lee tries to piece together the clues she is seeing, while covering the holiday events in Salem.

Bell ringing Santas, a holiday boat parade and all the other colorful stories of the holidays in Salem intrude on Lee's ability to investigate. When she covers a prospective jumper on a building, thinks there's more to the first murder than robbery.

An engaging mystery set in Salem, Witch City of America, and if the readers have visited Salem, it is a nostalgic walk through the city. Even if you have never been there, you will enjoy the descriptions.