A Gift of Bones 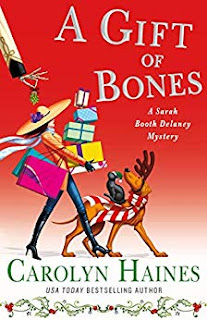 It's nearly Christmas in Zinnia, Mississippi, and Sarah Booth Delaney is looking forward to her first Christmas as a couple with sheriff Coleman Peters. In A Gift of Bones by Carolyn Haines, there's even a hint of snow in Zinnia. (A Gift of Bones will be released by Minotaur on October 16.)

Preparing for the holidays, Sarah Booth hopes the season will be quiet and peaceful. First Madame Tomeeka aka Tammy Odom, frightens Sarah Booth with a dream featuring two babies and something dangerous, Then suddenly her friend Cece bursts in asking for help for a dire situation. It seems Cece received a box with a lock of hair, a photo of a very pregnancy young woman and a ransom note. The young woman is Cece's cousin who she lost touch with years ago. Cece always loved Eve, but her parents didn't want Cece around, especially after Cecil transitioned into Cece. Cece lost track of Eve and has no idea where she might be now.

Sarah Booth naturally wants to involve Coleman, but the ransom

note says no police. Along with her partner Tinkie, Sarah Booth tries to find Eve's last known location. She decides to interview Will and Carla Falcon, Eve's estranged parents. Carla is a horrible person and threatens to call the police on the partners. They know they will not learn anything from this angry, vindictive woman, nor her meek husband.

It's a race against time to find Eve before the ransom has to be paid and as Sarah Booth digs deeper she uncovers a plot that would frighten even the most hardened hearts.

Another suspenseful mystery by one of my favorite authors, Carolyn Haines. I'm happy Sarah Booth's relationship with Coleman has moved forward, but I wish she'd stop teasing us about Tinkie. Carolyn, you are in charge of your characters lives, give Tinkie a baby!

If only I WERE in charge of the characters' lives. I have them right on track, and I write the scenes--and then in the middle of the night they torment me, wake me up, and let me know that I am NOT in charge. They want to do something differently. But I am working on Tinkie, for sure!