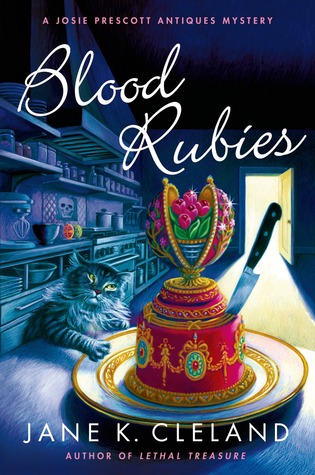 In Blood Rubies by Jane Cleland, antiques expert Josie Prescott is asked to appraise a one-of-a-kind Faberge Spring Egg snow globe with ruby red tulip gems. Before she is able to appraise the snow globe, it is found smashed beyond repair next to the body of TV show investment guru Jason.

In beautiful New Hampshire Ana Yartsin, budding reality TV show chef and owner of the snow globe, is filming an episode of her show as she bakes a Faberge wedding cake for Jason and his fiance Heather, a friend of Ana's. Complicating the relationship is Ana's brother Peter who was previously engaged to Heather. There are plenty of suspects in Jason's murder as his financial advice was not always sound and he followed the philosophy of "caveat emptor" - buy beware, but who would smash the incredible and priceless Faberge snow globe?

As Josie sifts through the fragments to determine if the snow globe was authentic, she discovers it is a fake. But where is the real one or was there even a real snow globe? Ana insists it has been in her family for decades and that her father brought it with him from Michigan to New Hampshire to be appraised.

Josie's staff eagerly uses their contacts in the appraisal world to discover who could have made a fake good enough to pass as an original. When a Russian artifacts expert from Boston is killed in a car accident on his way to see Josie, there seems to be more to the story than meets the eye. Incredibly the expert had appraised a Fabege snow globe quite recently, and Josie is convinced it must be the one she was scheduled to review. Rare as they are, it is highly unlikely that two snow globes would appear in the antiques world at the same time.

I enjoyed this book and the entire series. I'm sure everyone would love to discover a valuable antique in their own home. It's interesting to see how appraisals are used to authenticate antiques.

The first book in the series is Consigned to Death. 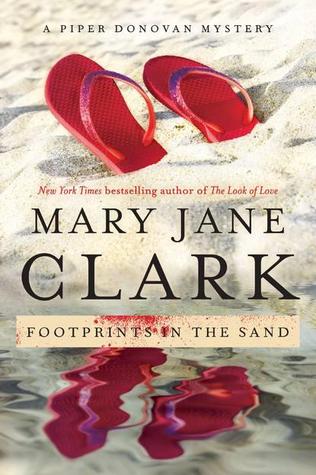 When Piper and her parents arrive they discover Kathy's friend Shelley is missing. When an elderly neighbor reports seeing a man with a woman's body tossed over his shoulder, no one is sure she saw what she thinks she saw. But when Shelley's car is discovered with blood on the front seat, the police become concerned.

Meanwhile Piper encounters a young Amish man making large brightly painted disks he calls "hex signs." She orders one for the bride and groom and recognizes that young Levi is troubled. When she tries to draw him out, he shuts down.

We later learn Levi has a secret, but he is terrified to reveal it because he had been drinking. Levi is
on his rumspringa and has been indulging in what the outside world has to offer. Trying to protect his sister Miriam as well as keeping the secret leads to danger.

Wanting to ease her cousin's concerns before the wedding, Piper starts to ask questions.Why would anyone deliberately want to kill Shelley? Did Roz Golubock actually see the murder? Is she in danger now? What is making the young Amish man so jittery? Why was his cell phone found at the burial site?

I enjoyed this series especially for the relationship between Piper and her parents. Her father Vin is a worry-wort who fears the worst in every situation and her mother Terri is a "glass is half full" type of person despite beginning to lose her sight to macular degeneration. Piper returning to the bakery has tapped into a creative side that enables her to
decorate and sell gorgeous wedding cakes while she waits for other acting roles.

The first book in the series is To Have and to Kill.
Posted by Map Your Mystery at 4:24:00 PM No comments:

On the Road to Threadville 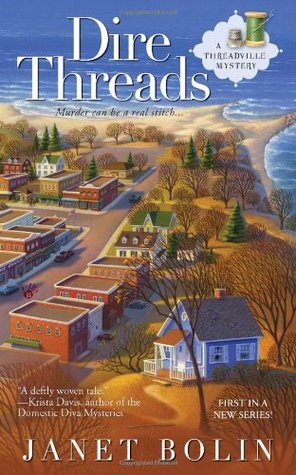 A new series I am reading takes place in Elderberry Bay, Pennsylvania. The first book in the series by Janet Bolin is Dire Threads and features Willow Vanderling the owner of  In Stitches embroidery shop - not any embroidery shop, but a high tech machine embroidery shop. Threadville, as the town is called features many shops related to sewing and draws tourists by the busload.

Willow hopes to improve the Blueberry Cottage on her property, but runs into problems with the zoning inspector Mike Krawbach. He's prefer to condemn the building and convert the area into an ATV trail. When Mike is found dead on Willow's property, the mayhem begins.

I can't decide if I liked this book as there are some extremely stereotypical characters in the book, such as the sheriff, who is called Uncle Andy, his grumpy wife Aunt Betty, the handsome handyman Clay Fraser and the eccentric beekeeper Smythe Castor. The town seems hostile to Willow and the other shopkeepers, even though tourists visit regularly, drawn by the shops. Yet when the river behind Blueberry Cottage starts to rise, everyone is out filling sandbags.

And whoa, there's way too much going on in this book including a fundraising memorial for the dead guy, a dinner dance the next day and the flooding.The plot is convoluted and leads in several directions before it is resolved. I'm not giving up on the series though, so I plan to read the next one in hopes that it improves.
Click here for other books in this series. 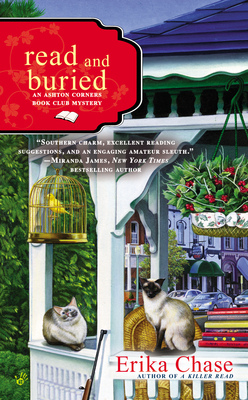 When the Ashton Corners (Alabama) Mystery Readers and Cheese Straws Society in Erika Chase's Read and Buried invited an award-winner novelist to their meeting, no one expected to be involved in murder. Derek Alton had been an award winner 18 years in the past, but he had a sequel planned that he claimed would be a blockbuster.

Club organizer Lizzie Turner meets with Derek over dinner to discuss the club members, but he becomes obnoxious and she leaves. The next day he arrives, remorseful, at Lizzie house. In a flash, someone shoots him through one of her windows.

Suspicion falls on Lizzie's friends.  Derek seems familiar to some of the residents of Ashton Corners, but no one recognizes his name. Lizzie and friends start digging and find out that Derek was not who he pretended to be. In the meantime Lizzie's boyfriend, Police Chief Mark Dreyfus, has been acting aloof and she doesn't know why.

I enjoyed this book and I am starting the next in the series. One of the elements I enjoyed most is the Reading List at the end of each book. Each chapter has a quote from a book and some of the characters talk about other books they have read. Having them listed at the back of the book gives readers an opportunity to find new authors. I only wish the recipe for cheese straws was included.

The first book in the series is A Killer Read.
Posted by Map Your Mystery at 1:14:00 PM No comments: 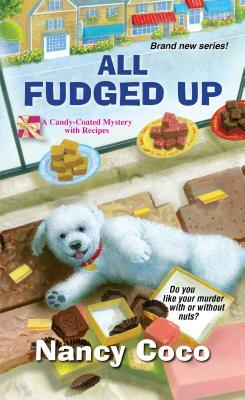 Mackinac Island has always held some allure for me, but after reading All Fudged Up by Nancy Coco, I'm not so sure about the residents of the island. They are either very provincial or unfriendly. For instance when Allie McMurphy returns to her grandfather's hotel, she is treated like an incomer, especially when she finds the body of her grandfather's archenemy in her utility closet. The annoying thing is people take to wearing purple or green ribbons to silently show which side they are on - the Jessops or the McMurphys.

This was too Hatfields and McCoys for me, but I plodded on lured by the fudge recipes. There are also two handsome men in Allie's dreams. One is Rex Manning, gorgeous police officer always at her beck and call, and the other is equally handsome Trent Jessop (yes from that family). I'm anxious to see how the author handles this Rex-Allie-Trent triangle with the wild card of college friend Jennifer added to the mix. 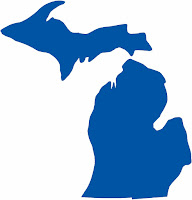 colors and locks installed on the hotel, while green lighting an ultramodern hotel being built by Paige Jessop (yes that family). Now I live in a small town and I understand the constant battle between old timers and newcomers, but this borders on obstruction. And for a community that thrives on outside visitors, I find calling them "fudgies" annoying as well, Maybe I am not going to be going to Mackinac Island, if this is a true depiction of the residents.

Several murders follow and Allie is eyed suspiciously by the purple ribbon crowd (Jessop side) although Rex doesn't think she should be a suspect. A rather convoluted plot ensures leading to shipwrecked booty and Prohibition. I'd say if it weren't for the dreams of fudge in my imagination, I would not be reading these books. Click here for other books by the author. 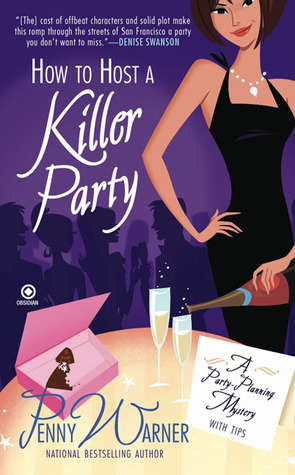 I have read many mysteries in my life, but I have never read one with a person who runs a crime scene cleaning service as one of the leading character (or any character for that matter). How to Host a Killer Party by Penny Warner features Presley Parker, event planner, and Brad Matthews, crime scene cleaner, and hunky to boot.

This series takes place in California, and is worth a laugh or two. I'm especially fascinated by the crime scene cleaner - ugh - think about that job.

Presley, downsized from her job, decides to use her childhood experience planning events with her mother Veronica Parker, to start her own event planning company. She cobbles together an array of freelancers to help her with the events. Presley is unexpectedly called on to plan a "surprise wedding" for Mayor Green and his socialite fiancee after the previous event planner is found dead.

As a possible suspect in the murder of  the other planner, Presley is anxious about pulling off the

perfect wedding, even if it is being held on Alcatraz. To no one's surprise, the prospective bride is furious about the wedding and storms off, only to be found dead the next day. There are suspects galore, but somehow the police seem to focus on Presley again.

There is some funny banter between Presley and Brad, but overall she is a little too ditzy for my liking. She wanders into dark corners and deserted places knowing full well there is a killer on the loose. I want to shout at her to use caution, but I think she is blindly going to follow her own path.

There are several other books in the series and I have read them as well. I did warm up to Presley, but the murderers are a little too obvious. For more books by this author, click here.