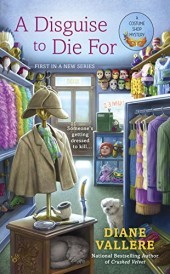 If you grew up in a costume shop and spent your adult life as a magician's assistant, I guess I could understand the desire to wear a different costume everyday. That's what Margo Tamblyn does when she returns to Proper City, Nevada, after her father has a heart attack. As he recovers, she takes over managing their costume shop, Disguise DeLimit. In a Disguise to Die For Diane Vallere introduces readers to her quirky character.

First up is the detective-themed birthday party for spoiled rich guy Blitz Manners (yep, that's his name). Blitz wants 40 detective costumes and he wants them quickly. Margo does her best to assemble the lot from Nancy Drew to Colombo to Sherlock Holmes to the Hardy Boys and beyond. All seems to be going well at the party until Margo discovers her old family friend and surrogate mother, Ebony, holding a bloody knife standing over the very dead body of Blitz Manners.

For Margo the number one priority is clearing Ebony's name, but that turns out to be harder than she thinks. First Ebony's car is vandalized, then Ebony disappears and 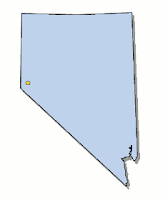 finally Margo finds an envelope with $20,000 near Ebony's car. Blitz had said he would pay Ebony that much money for her catering services, but she claims she did not receive it.

Meanwhile Margo's father Jerry and his friend decide to go on a trip down Route 66 somewhere near Area 51 to check out some alien costumes from a sci-fi fan. He had been looking forward to this trip for a long time and the heart attack does not slow him down. Managing the store and searching for clues takes most of Margo's time.

It soon becomes apparent that someone is trying to frame Ebony. When she is arrested, Margo doubles down and tries to find the real murderer.

There's a subplot with a Asian American man named Tak Hoshiyama and some nefarious dealings in the district attorney's office, which I expect to hear more about in the next book. I'm hoping there is another in this series as I found Margo goofy, but fun.

For more on these books click here.
Posted by Map Your Mystery at 9:34:00 AM