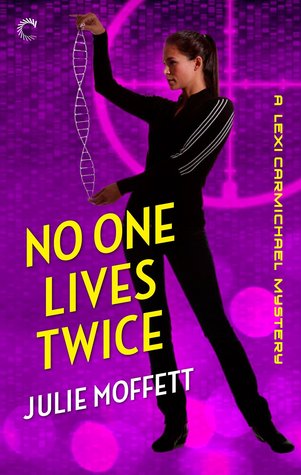 Lexi Carmichael always had an interest in numbers. Even as a child she carried math flashcards to entertain her parents friends. Now grown-up Lexi works as an information security technologist for the NSA in Julie Moffett's No One Lives Twice.

Lexi and her colleagues joke about how the NSA is the brains of the nation and the CIA spooks are the brawn. She usually spends her days web surfing and stopping hackers from compromising America's national security. Imagine her surprise when on her way to dinner at her parents, she is first accosted by a big, beefy-necked guy demanding some papers from her friend Basia. He threatens her with a gun, then hands her is business card and says to call him when she has the papers.

After an unsuccessful dinner party where her mother tried to set her up with a date, Lexi returns to her apartment. To her shock another man is waiting in her apartment and is demanding the papers. He brashly writes his telephone number on her forearm and tells her to call when she has the papers. As she gazes around her ransacked apartment, she wonders what the papers contain and who has them.

When the papers do arrive, their meaning isn't any clearer as they are in Polish with a note from Basia

to keep them safe. Lexi calls on one of her co-workers at NSA and a pair of brainiac computer genius twins she knows to help her translate the papers. Her quiet life is shattered when she discovers the seriousness of the information contained in the papers.

The Zimmerman twins feel they need to contact Slash, the legendary superhacker working for the NSA to help them unravel the mystery. They "summon" him through a cryptic message. I almost felt as if they were summoning Batman, but it works. With two foreign governments, an international fertility clinic/research company lawyer and Slash, the legendary superhacker and computer, after her Lexi almost wishes for her dull, boring life again..

What transpires is a chilling discovery of in vitro cloning and a wild chase through many countries to stop the plan. This is the first book in the Lexi Carmichael series. Although I came late to this series (there are several other books) I really enjoyed it. Lexi and her computer nerd pals are clever, funny and dedicated, plus there's plenty of action.

For more books in the Lexi Carmichael series, click here.