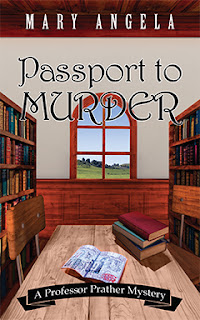 Poor Emmeline Prather. All her life she has dreamed of going to Paris and now she is on her way. In Passport to Murder by Mary Angela Em is on the plane with her students and some faculty members flying to Paris. Suddenly one of the professors goes into anaphylactic shock from a peanut allergy.

Outspoken Professor Molly Jaspers and her husband Bennett are on the trip because she is going to speak at the Sorbonne on organic gardening. Right before they board the flight, Molly and Andre Duman are overheard arguing. He says, "One day Molly is going to offend the wrong person and find herself in trouble." 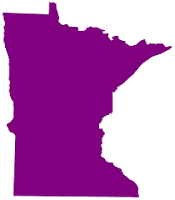 When the autopsy shows Molly had not ingested any peanuts and there was no peanut residue on her
clothing, the police change the verdict from accidental to murder. Naturally Em is devastated about having to return and she refuses to believe it was murder and especially doesn't believe Andre should be a suspect.

The sad group returns to South Dakota and their dreams of a week in Paris are dashed forever. As Em investigates, it seems dear Molly was not much loved by her colleagues. When someone else from the group dies, Em is determined to prove Andre is not the murderer.

The one plus in her misadventure is the opportunity to get to know her colleague Lenny Jenkins. While in Minneapolis, Em is invited to hear Lenny play guitar at First Avenue, where Prince got his start. Em even ropes Lenny into helping with the investigation.

When small pieces start to fall into place, Em knows who the killer is and works with the local police to solve the case.

Em is a terrific character - outspoken, funny and fearless except in the affairs of the heart. I hope to read more of Mary Angela's Professor Prather books.
Posted by Map Your Mystery at 8:06:00 AM

Thanks for your kind review. I love that South Dakota is on the reading map!