How many books have you published?
Thirteen so far, four in the Inspector Graham and Diana Hunter series, five in the Reverend 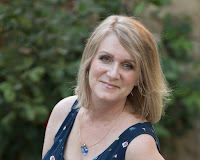 How did you become interested in writing?
As I child I wanted to write stories for the magazines my mother read. I thought they were so lame and I thought I could do better. But then life took over and I forgot all about the idea. I didn't start thinking about writing again until I volunteered for fundraiser rummage sale my kids school was running in 2010. We'd had trouble the previous year getting volunteers so I decided to blog about our latest efforts in an attempt to motivate other parents. It was well received and we ended up raising over $30,000 in one weekend. That made me think I might be on to something. I started blogging, writing newsletter for other people, ghostwriting, and eventually published a few non-fiction books. Finally, I decided I wanted to write fiction and came up with the ideas for the three series and it went from there.

What is a day in the life of an author like? Do you write a certain number of words, do you write in the morning or evening, etc?
I write in the morning. Writing is harder for me than marketing so I do that first. I go over and over a draft many times before I'm satisfied that it is ready. The first few are the hardest and take the longest. So I might write or edit over two or three hours per day for the first few drafts then as the copy gets cleaner I move quicker and work longer on it. I end up reading the entire book in a day at the end of the process just before publication. I read all the drafts aloud, walking around my house.

Do you plot the entire book first, then write or plot as you go?
80-90% is plotted beforehand. I don't always know the odd fine twist but they come to me as I work. However, I have been known to make drastic changes during the editing change if the story doesn't feel right. I've even changed who the murderer is after I've written the whole book.

Do you use real people and places as models for your books?
Quite often a character will contain a kernel of a real person or may be amalgam of several. I often use situations that I've come across in real life that have struck me as unusual as inspiration but nothing is directly lifted.

Who is your favorite author?
Ooh, so many: Jane Austen and Charles Dickens have written my favorite classics. I like Kate Atkinson and Deborah Crombie. I'm about to start Louise Penny because so many of my readers recommend her.

How do you promote your books?
I have my lovely reader email list, I run AMS ads, put my books in box sets with other authors, run the occasional promotion including BookBubs.
Posted by Map Your Mystery at 8:32:00 AM