What is the title of your newest book? How many books have you published? 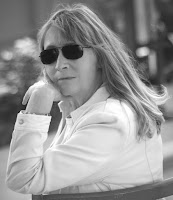 My latest book is Murder in the First Edition to be released on September 24. It is the third in, what to date, will be a series of six, Beyond the Page Bookstore Mysteries.

In book one, Murder by the Book, readers discover that our protagonist Addison (Addie) Greyborne, a rare and old book expert from Boston has had, to say the least, a lousy year. Her fiancé was killed during a home invasion robbery, and her father died in a car accident. After that, a great-aunt she didn't know she had passed away and left Addie her entire estate, including an old Victorian house and all its contents. Addie had never heard of the town Greyborne Harbor, where the house was located, but the quaint New England coastal village seemed like the perfect place to start life afresh after suffering through her heart-breaking losses. Besides, the town and Addie share a name - Greyborne - so it must be fate, right?

Addie discovered her aunt’s house held a treasure trove of rare books and collectibles which Addie thought were too precious to be hoarded away in a dusty attic and should be shared with the world. Some of the books were of museum and library quality and others, though old and well-loved, had little monetary value but would be perfect in a used bookshop. Except the small town, she now called home didn’t have one. That was when she decided she would open her own book and curio shop. So Beyond the Page Books and Curios was born, and then the peaceful new life she had envisioned became anything but... it wasn’t long before her reputation lay in ruin, and evidence pointed to her as a suspect in the murder of a local merchant. All this before she’d even finished unpacking and settling into her new home. 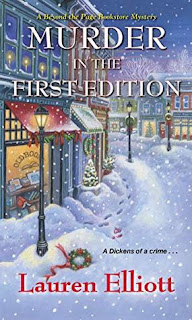 If readers love stories that are centered on bookstores and rare books, then they’re going to enjoy following the adventures of Addie, Serena, her best friend and local tea merchant, plus the other cast of colorful characters in the quaint seaside town of Greyborne Harbor where murder and mystery are not … uncommon.

For a review of Murder in the First Edition, click here.

How did you develop your character and choose your location?
As far as developing my character Addie Greyborne, the inspiration behind my Beyond the Page Bookstore Mystery series, came to me a number of years ago. I had a good friend who owned a small used bookshop and being the book lover I am, it became my second home. Her shop was my vision of the perfect bookstore - old and rare books, a reading corner, charming knick-knacks and a bay window display that she decorated to highlight the season and one that never failed to attract passersby.

When I had more time to devote to writing, my old reading friend, Agatha Christie emerged, and the first image that came to mind was my real-life friend Maggie and her bookshop. From there, Addie’s was born. Even though, Beyond the Page Books & Curios is an expanded version of my friends, it’s one that I hope, through my writing, reflects the same feeling to readers as Maggie’s did to her customers. Which, is an environment where you want to browse, stay and in general, enjoy the ambiance of comfy reading chairs along with the aroma of fresh brewed coffee niggling at your nose - a place that feels like home away from home … well, except perhaps for the murder and mayhem surrounding Addie’s bookstore.

Massachusetts, a state rich with history and culture seemed the ideal location in which to base Addie’s stories because it lends itself to a wide range of possible story plots. For example, the second book in the series has references to pirate legends and buried treasure.

What do you enjoy about the author’s lifestyle? What do you not enjoy?
As long as I can remember, I’ve been penning short stories or poems or plotting and writing a novel. It’s always been something I did. It’s natural for me like breathing. I suppose I’ve never thought of it as a lifestyle, it’s just who I am.

There are times as a published author when you do feel the pressures of deadlines, and I think a quote I once read by Agatha Christie best sums it up. “There was a moment when I changed from an amateur to a professional. I assumed the burden of a profession, which is to write even when you don't want to, don't much like what you're writing, and aren't writing particularly well.”

Do you model your character after yourself or any one you know?
Most of my characters are roughly based on people whom I have crossed paths with in some way during my life, but their individual characteristics can be a combination of more than one person. Keen observation skills are required in fiction writing. There was an important lesson that I learned while studying journalism. It was that a person speaks more and exhibits more clearly their true intentions through their body language than the words they convey. This is something I attempt to incorporate into all my characterizations – the little nuances, such as a lip or cheek twitch, biting one’s lip when stressed or thinking, an occasional eye roll, a slight tic of the head or shoulders, a fleeting smirk or snicker. It’s those small things that give us a more detailed glimpse into a person’s character than just writing their dialogue and telling readers what color their hair is or describing their body build.

My whole life the stories have just come to me. I have always been an observer of people and made-up stories about them as I watched them. It might be something as insignificant as a woman sitting alone in a café and the look on her face or the set of her shoulders, or a twitch of her eye as she glances around the room. I start to wonder what her life is like, what her story is, why she’s there, why is she alone? Character development comes from the old who, what, where, when, why and how of journalism based on those observations, we make daily. If I don’t write an actual story about the woman in the café, I will at least file her away in my memory banks to use those observations for a character in one of my books later.

If you could tell your younger writing self anything, what would it be?
I would tell myself to remember that writing is a learned craft and an evolving process. Don’t ever give up. It’s your passion and to also remember very few writers have the success of JK Rowling or Stephen King. It took them over twenty years to reach the success levels they enjoy today, and in the beginning of their writing careers. They too received enough rejection letters from agents and publishers to wallpaper their home offices with before someone took a chance on them. Be prepared for the long haul, a lot of hard work, and the ability to develop a thick skin, but always remember why you are persevering and keep writing because if you don’t, a part of you will shrivel up and die.

If your books were made into a movie, who would you want to play the lead character?
As a very visual person, I have a file dedicated to images of how I hope to illustrate, through my words. The town and region my Beyond the Page Bookstore Mystery series is centered. When I created the character of Addie Greyborne, the visual that came to mind was of actress Bethany Joy Lenz, who has appeared in a number of television movies. I maintained an image of her in my head as my character developed. Conversely, I recently watched a movie starring actress Sarah White Drew. She used to play the part of Dr. April Kepner in the ABC medical drama series Grey's Anatomy and thought she too, would make a perfect Addie Greyborne. So I would be delighted to see either woman take on the lead role.

Who is your favorite author?
I don’t have one favorite author. I have many whom I enjoy reading. I did grow up devouring the entire Nancy Drew series and then graduated to Victoria Holt, Agatha Christie, Sir Arthur Conan Doyle, Barbara Erskine, Lynn Kurland, and Michael Crichton to name a few. However, if you were to take a peek at my current TBR list, you’d find an assortment of authors and genres. There’s everything from cozies, to time travel and gothic mystery romance.

If you could invite five people – living or dead – to a dinner party, who would they be?
For me, the dinner-party list wouldn’t be complete without Sir Arthur Conan Doyle and Agatha Christie. As both are masters of the craft of mystery writing. Then I would add another author, who can provide extensive insight into human character and behavior, Michael Crichton. That being said for fear that the dinner conversation would perhaps become a little intense for other guests, I would most certainly include English actor, comedian, screenwriter, and producer John Cleese for some comedic relief. I guess my fifth esteemed guest would have to be Queen Elizabeth I, as I have had life-long fascination with her life and the Elizabethan period in general.

If you could not be an author, what would like to do as a career?
Career wise, I have led a very diverse life to date. There are few hats I’ve not worn in my working career. I believe all of my experiences were presented to me for one singular reason, and that was to gather and study people and situations, so that I might better incorporate my learned knowledge into my writing. As far as desiring another career, there is nothing else I would even consider pursuing. I am now living my dream.
Posted by Map Your Mystery at 6:00:00 AM