What is the title of your newest book? How many books have you published?
My newest entry in the Mah Jongg Mysteries series, Book 4, is Beware the East Wind. Each of the
titles in this series includes a mah jongg term. In the game, there are four sets of tiles named after the winds, East, West, North and South.

How did you develop your character and choose your location?
The series takes place in central Florida in the fictional town of Serendipity Springs. I live in central Florida half the year and after writing two contemporary romance series which take place in my home state of Iowa decided I’d like to write about my new home. This is where I learned how to play Mah Jongg when I first retired, just like my four protagonists.

What do you enjoy about the author’s lifestyle? What do you not enjoy?
I like being able to create my own characters and my own story. As an indie author these days, I have 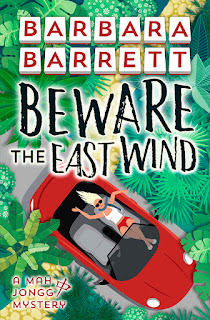 almost total control about subject matter, character development, number of books I write, when I release them and price.

Do you model your character after yourself or any one you know?
When I decided my series would feature four main characters, I wanted to make them alike in the sense they are all about the same age and are retired but also different in personality so that their unique talents mesh together to solve a murder. I went so far as to consult the DISC Personality Inventory, which describes four main types of personalities, and model each of my characters after one of those types: Dominance, Influence, Steadiness and Conscientiousness. I made two of them quite tall; since I’m not, I’ve always wanted to live in the head of someone who is. I made one short like me, because I can identify with the types of challenges faced by someone under average height. I make it a point to let my friends know that none of the characters is modeled after any one person; instead, they are an amalgamation of family, friends and acquaintances and my imagination.

How do you get yourself out of a writing rut?
Until I began a diet several months ago, my go to method for getting out of a writing rut was chocolate. That no longer being an option, I now switch to another activity or writing something else. Sometimes, when even those approaches don’t work, I reread the section of the manuscript that has me stumped or even return to the goal, motivation and conflict I’ve developed for the work and analyze which of them isn’t working.

If your books were made into a movie, who would you want to play the lead character?
Sydney Bonner – Helen Mirren
Marianne Putnam – Dame Judi Dench
Micki Demetrius – Sigourney Weaver or Allison Janney
Katrina Faulkner – Mary Steenburgen with shorter hair

If you could invite five people – living or dead – to a dinner party, who would they be
Ann Curry, to ask questions and keep discussion going when my well runs dry
Agatha Christie, to hopefully benefit from her genius in creating the cozy mystery
Lin Manuel Miranda, hoping some of that creativity will be catching
Erma Bombeck, to keep us laughing
Carla Hall, to help prepare the meal

If you could not be an author, what would like to do as a career?
Interior design, HGTV personality