Death by the Bay 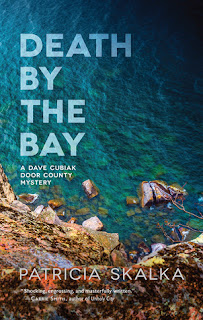 Being at the right place at the right time sets Door County Sheriff Dave Cubiak on the path to solving a suspicious death. When the ninety-three year old founder of the prestigious Institute for Progressive Medicine, Dr. Melk, falls dead at a conference, it appears to be from a heart attack. In Death by the Bay by Patricia Skalka, Dave questions those in attendance including Dr, Harlan Sage, director of the institute, and a writer named Linda Kiel.

Linda Kiel is writing an approved book on the Institute highlighting the positive achievements. She has spent many hours with Dr. Melk discussing the Institute and Dave wants to hear what she has to say. As he leads her to a separate conference room, he hears someone crying "Mi hermano. Mi hermano gemelo." He discovers one of the housekeepers looking with shocked awe at a photograph on the wall that is part of the doctor's presentation.

The housekeeper believes the photo is of her younger brother who had Down's Syndrome and has been missing for many years. He was taken away from his family in Mexico by a doctor who said he could cure him and would bring him back. That never happened.

As Dave continues to dig, the trail leads him to a family in Door County who is also missing a sibling. Because she is elderly and may not be remembering details correctly, most people think Florence Fadim is fantasizing about her missing sister Margaret. Through repeated conversations with her, Dave learns the sister also may have been taken by doctors hoping to cure her polio.

When another death occurs, Dave doubles down on his investigation and learns many disturbing secrets about Dr. Melk's past and his present activities at the Institute for Progressive Medicine. Long buried secrets and the Institute's dark past lead Dave on a search or the truth. A shocking tale of medical abuse and how the quest for notoriety and fame distorts the moral compass.


Disclosure: I received this book from the author for a fair review.
Posted by Map Your Mystery at 6:00:00 AM