Murder in the Oval Library

If Washington, D.C. is considered a figurative cesspool now, it was a true cesspool in 1861. In Murder in the Oval Library by C.M. Gleason, the city of Washington, D.C. had no paved roads and when it rains, the roads turn to mud. The interior of the White House is tattered, carpets are threadbare and walls are in need of paint. More dramatically, the South secedes from the Union.

With fears that the Southerner army will invade Washington, D.C., old friend and Senator Jim Lane organizes a motley crew of over 100 men to guard the President and the White House. They are garrisoned in the East Room and they include President Lincoln's trusted aide Adam Quinn.

The Frontier Guard, as they are dubbed, keeps a watch and waits for the inevitable attack. When morning comes and no attack has taken place, everyone heaves a sigh of relief until they find one of the Frontier Guard dead in the oval library.

When the body is examined by Dr. George Hilton, there is indeed a surprise. The body is that of a 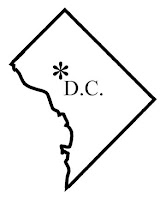 woman and Quinn sets out into Washington to see what he can discover. He also stumbles across newspaper reporter Sophie Gates alone in the castle of the Smithsonian. He knows she is not safe in the city and forces her to return with him to the White House. She is more inclined to want to investigate.

Another of Quinn's female admirer also makes her presence known in the form of Southern belle Constance Lemagne. She volunteers to draw a likeness of the deceased woman in the hope that someone will recognize her.

While President Lincoln and everyone else who supports the North wait in fear for the rebels to invade Washington, Quinn, Hilton and Gates continue to investigate.

A fascinating look at the early days of the Civil War and the colossal blunder the South made by not invading Washington, D.C.
Posted by Map Your Mystery at 6:00:00 AM

Looking forward to diving into this series!