Murder in an Irish Pub

A poker tournament comes to Kilbane, but where there are poker players there are sharks. In Murder in an Irish Pub by Carlene O'Connor, Garda Siobhan O’Sullivan isn't feeling like a poker tournament in town isn't such a good idea. She keeps that feeling to herself and heads to Rory's Pub where it is being held.

Three of the most famous poker players are in town: Eamon Foley, the Octopus; Clementine Hart, the Queen of Hearts; and Shane Ross, the Shane of Spades. They beginn playing a few hands when suddenly Eamon finds himself holding the famous "Dead Man's Hand"- black aces and black eights.  Legend has it Wild Bill Hickok was holding that exact hand when he was murdered. 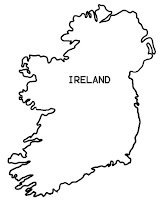 As Eamon leaps to his feet another deck of cards is found on his seat and everyone begins arguing. Nathan Doyle, the poker official, says he will review the video and make a decision about disqualifying Eamon the next day. There's a quarter of a million Euros at stake, so the decision is important.

When Eamon is found hanging in the bar’s storeroom the next morning, it’s thought to be a suicide, but  Siobhan thinks it was murder. Eamon's wife Rose was about to have a baby and Siobhan doesn't believe he would kill himself. The difficult with proving it was murder was the locked storeroom. As she and MacDara Flannery investigate, she begins to find clues that make it ore likely to have been murder.

Another entertaining entry into the Irish Village Mystery series
Posted by Map Your Mystery at 6:00:00 AM

Well, I just purchased the Audible version and can't wait to listen! What a great series.