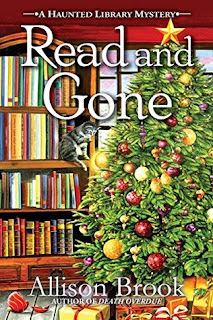 It takes a share of a $20 million jewel heist into get Jim Singleton back in his daughter Carrie's life. In Read and Gone by Allison Brook, that's not exactly the reunion she had in mind.  When she catches him breaking into her cottage after her housewarming /birthday party, she's as stunned to lay eyes on him as he is to see her. (Read and Gone will be released on September 11.)

Years before, although he continues to deny it, Jim was involved in a multi-million dollar jewel heist in town and he is back to reclaim his half of the money. It seems he and local jeweler Benton Parr robbed the store and Benton decided to hid the jewels until things cooled down.

Benton is the model of propriety; he even serves on the library board, but no one thinksmost people think he had nothing to do with the jewel theft. Jim knows better. And rumors persist that he stole his mother-in-law's emerald and diamond necklace, but his wife hushed things up and got her mother's gems back.

Before long it becomes apparent that Jim needs Carrie's help finding the jewels. She is none-to-keen
to help, but thinks if she does, she can keep Jim out of trouble. When Benton is found dead in his store, the day after his library presentation and Jim is arrested for the murder, Carrie is quick to jump in.

Complicating matters is Carrie's boyfriend Dylan, an insurance investigator, who might in fact be investigating her father. Torn by her attraction to her boyfriend and her loyalty to her father, Carrie quietly tries to solve the case with the help of library's resident ghost Evelyn Havers.

Can Carrie and her cat Smokey Joe solve the case before Dylan finds evidence of Jim's part in the heist? An entertaining mystery with a ghost, a library cat and an absent father complicating Carrie's life.