Editor's note: Although I have been thinking of adding an author/state index, it was the prodding by Leslie that actually saw it accomplished. Check out the home page to see the state and authors listing. Thanks, Leslie. 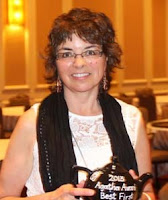 How many books have you published?
Killing Thyme (October 2016), will be my seventh---all since September 2011, which after many years of writing without publication, truly astonishes me. My first book is a guide for writers on using the law in their fiction, Books, Crooks and Counselors: How to Write Accurately About Criminal Law and Courtroom Procedure  (Linden/Quill Driver, 2011), winner of the 2011 Agatha Award for Best Nonfiction. So far, there are three Food Lovers’ Village Mysteries, Death Al Dente  (winner of the 2013 Agatha Award for Best First Novel), Crime Rib, and Butter Off Dead; Treble at the Jam Fest  will be in May 2017, and I’m about to start the fifth, featuring Christmas in the village of Jewel Bay, Montana.

Killing Thyme is the third Spice Shop Mystery, set in Seattle’s famed Pike Place Market. The series began with Assault and Pepper, and continued with Guilty as Cinnamon.

Under what names do you publish?
Leslie Budewitz, my very own! (Not a name even a fiction writer could make up!)

Do you plot the entire book first, then write or plot as you go?
My process has changed over the years. I planned my first four novels, creating outlines with a few sentences for each chapter, though I knew how important it was to let the characters speak and change as the story developed. The last three and the WIP (work in progress) have, insisting on being more intuitive. I always know the basic scenario, the core emotional conflicts, and the ending, although I admit that the killer has changed in the process twice (Crime Rib and Guilty as Cinnamon). The key for me is that the plot must grow from the characters, from what they want and what they will do to get it, so naturally some things do change as I get to know my story people better.

How do you keep continuity on backstory? For example I read a book recently where the lead character said she had three brothers, several books later, she was an only child.
I keep a fairly detailed series bible with those details. Alas, that didn’t stop me from discovering that I had named minor characters in both series Sam and Jennifer!

Who is your favorite author?
Oh, gosh---I hate to answer because I’ll miss a few, and my answer would probably be different every day! In cozy world, I’m particularly fond of  Krista Davis, Cleo Coyle, Barbara Ross, and Victoria Thompson. In other subgenres, I adore Louise Penny and Deborah Crombie, and the wonderfully suspenseful standalones by Catriona McPherson and Laura Lippman. I’m working my way through Jacqueline Winspear’s Maisie Dobbs series, and I’m crazy about Shelley Costa’s new series---watch for The Killer’s Guide to Good Works, out this fall. Literally and figuratively, my reading is all over the map!

Do you write with pen and paper or a computer?
Computer, though I do keep a notebook for each book, where I scribble those thoughts that occur to me in the middle of the night or on a trip without a laptop! For the Village books, I’ve got a bulletin board with pictures I’ve gathered, and for the Spice Shop books, I keep a sketchbook that corrals notes, pictures, and drawings I made while prowling the Pike Place Market and other Seattle neighborhoods, searching for just the right spots!

I'm delighted to meet a blogger as obsessed with place as I am! Thanks for the chat, Christine!